The Bank of England (BoE) sanctioned two emergency rate cuts during March in a bid to address the impact of the COVID-19 pandemic, leaving interest rates at a historic low of 0.1%.

Amid growing concerns surrounding the economic repercussions of the COVID-19 outbreak, the BoE announced an unexpected half a percentage point rate reduction on the morning of Budget Day (11 March). This was the first-rate change outside of the BoE’s normal Monetary Policy Committee (MPC) schedule since 2008 and reduced the Bank Rate to 0.25%, a record low only previously reached in the aftermath of the 2016 EU referendum.

Eight days later, the BoE announced a second unscheduled cut which saw rates fall to 0.1% – the lowest ever level in the Bank’s 325-year history. In addition, new Governor, Andrew Bailey, announced a £200bn increase in the BoE’s quantitative easing stimulus package, which is designed to pump cash into the economy and hold down the cost of borrowing. Mr Bailey also intimated that a further package of measures may be necessary, although whilst not ruling it out, did reiterate his view that the imposition of negative interest rates would hurt bank lending.

Although no subsequent action was taken when the MPC held its scheduled meeting on 25 March, the minutes reaffirmed the Bank’s readiness to expand asset purchases further, if it felt such steps were required to protect the country’s financial system. The minutes concluded: ‘The MPC will continue to monitor the situation closely and, consistent with its remit, stands ready to respond further as necessary to guard against an unwarranted tightening in financial conditions, and support the economy.’

Survey evidence suggests the UK economy is shrinking at a record pace following the forced shutdown of businesses across the service sector in face of the COVID-19 crisis.

The latest Purchasing Managers’ Index, where any figure under 50 represents contraction, sank from 53.0 in February to a reading of 37.1 in March. This was the lowest figure ever recorded in the survey’s 22-year history, even surpassing the slump in business activity witnessed at the height of the 2008 financial crisis.

Data for the survey was collected between 12-20 March, just prior to the government ordering the closure of all pubs, restaurants and other non-essential businesses, and historical comparisons suggest the latest reading is consistent with the economy shrinking at a quarterly rate of between 1.5-2.0%.

The most recent gross domestic product (GDP) figures released by the Office for National Statistics (ONS) also showed that the UK economy was already flat-lining before the COVID-19 pandemic struck. In the three months to January 2020, the economy posted zero growth, the third month in a row that the three-month measure of GDP had flat-lined.

Looking forward, the BoE has suggested it is too early to gauge the overall severity of the economic damage that will be caused by the outbreak. However, while it has acknowledged there will be a ‘large and sharp’ economic shock, the BoE has also expressed hopes that it will ultimately prove temporary, particularly if job losses and business failures can be minimised by appropriate policy interventions.

Meanwhile, economists at Morgan Stanley have released forecasts which suggest the UK economy will shrink by 10% or more across the second quarter of the year and by just over 5% in 2020, as a whole. Both predictions assume social restrictions will be relaxed during the second half of the year.

March was a challenging month for global markets, as investors assessed the economic damage from the pandemic. Although some indices have rallied in the last week or so, they largely remain down over the month and the quarter. Many central banks have taken decisive fiscal and monetary action to shore up economies, which, to some extent, has served to stabilise financial markets, but as the virus spreads, large-scale uncertainty remains.

Some indices rose on the last day of March, following the release of stronger-than-expected industrial data from China, which raised hopes that the world’s second-largest economy could stage a rapid recovery.
The official survey of Chinese factories indicates the easing of restrictions has prompted a rebound, with the manufacturing sector’s Purchasing Managers’ Index reading 52.0 in March, well above forecasts of 45.0 and a significant increase from the record-low figure of 35.7 in February.

As the epicentre of the pandemic shifts from China to Europe and now the US, the Dow Jones and NASDAQ posted their worst quarter in decades. The economic stimulus bill, known as the CARES Act, together with a series of actions taken by the Federal Reserve, have provided some lift, but uncertainty endures.
On the foreign exchanges, sterling closed the month at $1.24 against the US dollar. The euro closed at €1.12 against sterling and at $1.10 against the US dollar.

Following a mid-month high of around $1,679, gold is currently trading at around $1,575 a troy ounce, a loss of just 0.68% on the month. Despite heading for a sixth straight quarterly rise, the price tailed off towards the end of March as the dollar strengthened and strong Chinese economic data increased risk appetite. Brent crude is currently trading at around $26.35 a barrel, a loss of 47.82% on the month.

A collapse in demand, driven by the outbreak, and a glut of supply, due to the unresolved price war between Saudi Arabia and Russia, has seen the price fall significantly. In March, a deal on supply curbs between the Organization of the Petroleum Exporting Countries, Russia and other producers, disintegrated. 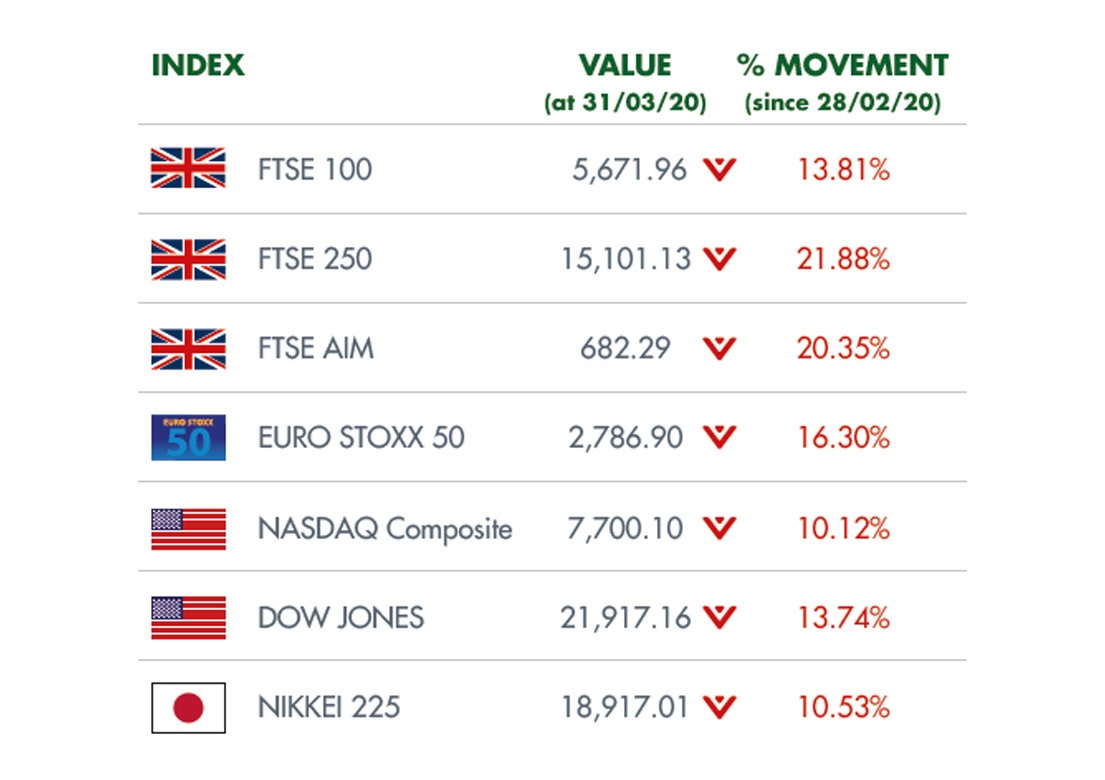 Data produced by ONS has revealed that the Consumer Prices Index (CPI) 12-month rate – which compares prices in the current month with the same period a year earlier – dropped to 1.7% in February, down slightly from a six-month high of 1.8% in January. This slight easing in inflationary pressures reflected a fall in the cost of motor fuels as well as often-volatile video game prices.

February’s figures also revealed downward pressure in the consumer price pipeline. The annual rate of inflation for goods leaving the factory gate, for instance, slowed to 0.4% in February, down from 1.0% in the previous month and the slowest rate of growth reported since July 2016.

Economists are also predicting that the rate of CPI inflation will continue to fall over the next few months. This is largely due to the collapse in global oil prices as a result of reduced demand in the face of the COVID-19 pandemic, with the price of oil having more than halved in US dollar terms over the past month. In addition, the cap on household energy bills and a slump in consumer demand across the travel, leisure and recreation industries are also expected to exert downward pressure on inflation.

Indeed, forecasts released by the BoE suggest the CPI figure is likely to drop below 1% in the spring, thereby remaining comfortably below the Bank’s 2% target level. However, the BoE also stressed that it would continue to closely monitor developments in inflation expectations and that, further ahead, it does expect the CPI rate to increase as a result of the recent significant depreciation in the sterling exchange rate.

Official figures show that UK retail sales stagnated in February even before the imposed shutdown that is now expected to prompt an inevitable slump in sales in the coming months.

According to the latest statistics released by ONS, retail sales volumes were flat in February compared with the same month a year earlier; in comparison, the same measure of sales grew by 0.9% in January. This was the first month in which sales have not grown since March 2013, when the UK suffered the heaviest snowfall for 30 years.

The latest retail sales survey published by the Confederation of British Industry (CBI) also suggests sales were broadly flat in the year to March, although the overall results do mask a sharp divergence across sectors. Unsurprisingly, grocers reported exceptionally strong growth in sales as households stockpiled in response to the COVID-19 outbreak and the introduction of social distancing measures, while most other sectors reported sharp falls.

Commenting on the March figures, CBI Principal Economist Ben Jones said: “These are extraordinary times for the retail sector. Grocers are seeing a temporary increase in demand because of coronavirus.
But many other retailers are seriously suffering as households put off non-essential purchases and social distancing keeps people away from the High Street.”

Looking ahead, the CBI survey – which was conducted prior to the government’s shutdown of non-essential stores – suggests a bleak outlook for many retailers. Indeed, while grocers said they expect sales in the year to April to be stable, most other sectors are expecting continued sharp falls and, overall, retailers were found to be more pessimistic than at any point since April 2009. This has led some economists to predict that April’s retail sales volumes figure could decline by as much as 30% on a month-on-month basis.

It is important to take professional advice before making any decision relating to your personal finances. Information within this document is based on our current understanding and can be subject to change without notice and the accuracy and completeness of the information cannot be guaranteed. It does not provide individual tailored investment advice and is for guidance only. Some rules may vary in different parts of the UK.
PrevNext

If any article in this market update has an effect on your finances and you would like professional advice, then please get in touch.

Please leave your details and click submit to subscribe.
You can OPT-OUT at any given time if you no longer wish to receive our updates!

We use cookies to ensure that we give you the best experience on our website. If you continue to use this site we will assume that you are happy with it.Ok