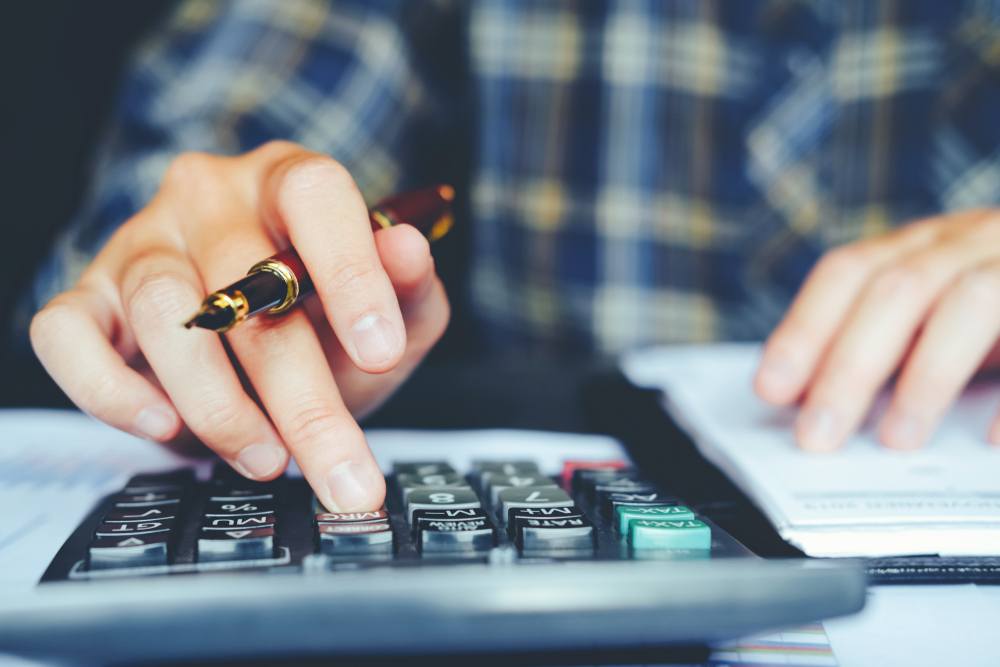 As recent economic statistics confirm the UK officially entered recession, Bank of England (BoE) forecasts suggest the slump will be less severe than previously thought, but the ensuing recovery is likely to take longer.

Data released by the Office for National Statistics (ONS) showed the economy shrank by 20.4% between April and June compared with the first three months of the year. This was the UK’s largest ever quarterly contraction and pushed the economy into its first technical recession – defined as two successive quarters of negative growth – since the 2009 financial crisis.

While the data was undoubtedly grim, it did show the economy’s low point was reached in April when output was over 25% below its pre-pandemic level. It also showed that, as lockdown restrictions eased, the economy bounced back, expanding by 8.7% in June following growth of 1.8% in May.

Survey evidence also suggests this improvement has continued, with the IHS Markit/CIPS flash composite Purchasing Managers’ Index rising to a near seven-year high of 60.3 in August, up from 57.0 in July. However, while this does indicate accelerated growth, it does not signal a return to normal levels of output.

The BoE’s latest economic forecasts released in early August, reinforce this point. Although the Bank said that a faster easing of lockdown restrictions and a more rapid pick-up in consumer spending has helped the economy rebound faster than previously envisaged, it also warned that a slower-paced recovery now appears likely.

Specifically, the new BoE forecasts suggest the UK economy will shrink by 9.5% this year, compared to a previously estimated contraction of 14%. The annual growth rate in 2021 has been reduced to 9% from a previous estimate of 15%, which would mean the economy only regaining its pre-virus size at the end of 2021.

The BoE left base rates unchanged following the latest meeting of its Monetary Policy Committee (MPC) but stated that it was ‘currently considering’ the case for cutting interest rates below zero.

At a meeting held on 4 August, the MPC voted unanimously for no policy change, with the Bank Rate maintained at a record low of 0.1%. In addition, the minutes of the meeting stressed the Bank has no intention of raising rates until there is ‘clear evidence’ that a recovery has taken hold. The minutes also stated that the MPC continues to ‘monitor the situation closely’ and that it is keeping under review a range of possible policy responses.

One potential course of action open to the MPC is to impose negative interest rates in order to provide stimulus to the economy, a path that central banks in both Japan and the eurozone have gone down. The BoE confirmed they are currently considering whether the Bank Rate could be cut below zero and whether such a policy might prove to be an effective tool in the UK.

However, BoE Governor Andrew Bailey again reiterated that policymakers are unlikely to introduce negative rates at any point soon, partly because such a move could inadvertently reduce bank lending or lead to customers withdrawing their savings and holding them in cash. Additionally, there is a fear the public will find the whole concept of negative interest rates difficult to comprehend.

Commenting specifically on the prospect of negative rates, MrBailey said: “They are part of our toolbox… but at the moment we do not have a plan to use them. There would be a lot of explaining to do on what this means, why we’re doing it, and what the benefits would be.”

Major benchmarks ended August in positive territory. US stocks hit record highs at the end of the month after Federal Reserve Chairman Jerome Powell outlined the central bank’s inflation control measures and strategy for avoiding future crises at the virtual Jackson Hole Economic Policy Symposium. Powell said that the central bank would launch a new monetary policy framework that will likely see interest rates in the US remain low for longer. European stocks were mixed as markets continued to try and make sense of the historic shift on inflation announced by the Fed.

Global stocks responded positively as renewed optimism about US-China trade tensions surfaced, with US Treasury Secretary Steven Mnuchin and Chinese Vice Premier Liu He reaffirming their commitment to a Phase 1 trade deal on 25 August. In the US, the blue-chip Dow Jones index ended up 7.57% for the month, while the tech orientated NASDAQ returned a 9.59% gain. 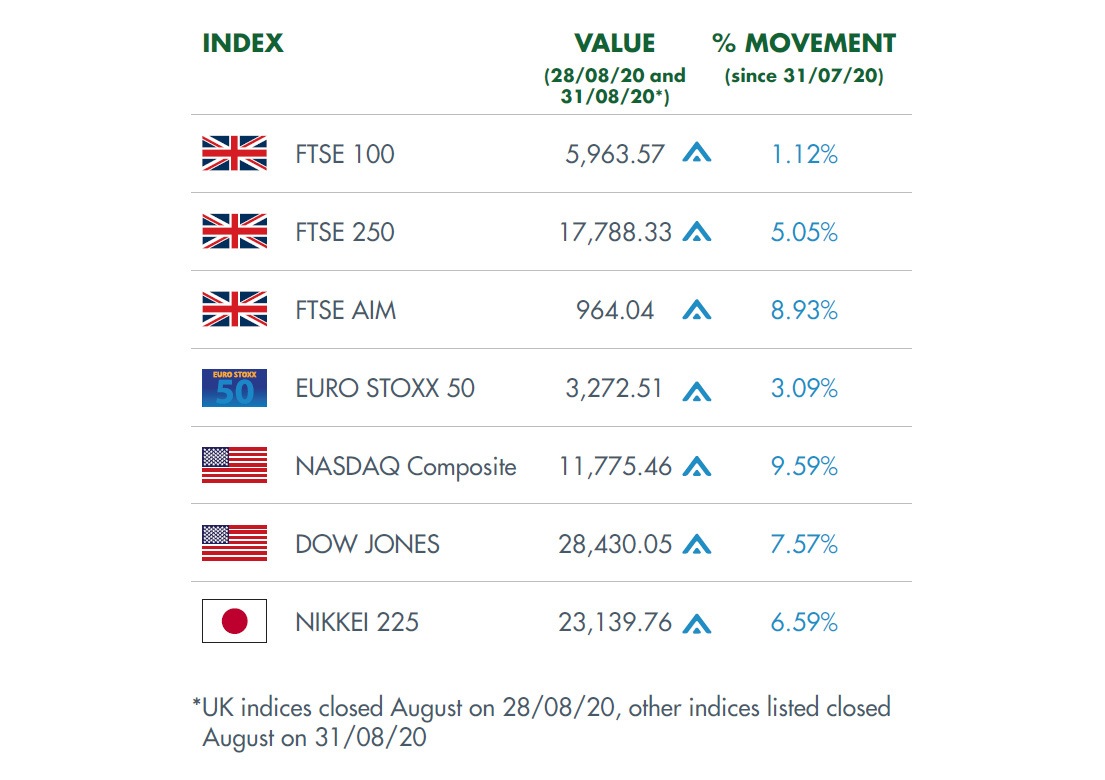 Official data shows that retail sales rose above pre-pandemic levels in July as a strong rebound in consumer demand continued.

According to the latest set of statistics, retail sales volumes grew by 3.6% in July compared to the previous month’s figure. This maintained the strong recovery since April’s record decline and resulted in volumes rising back above pre-coronavirus levels. Indeed, July’s total sales figure was 3.0% higher than February, the last month unaffected by lockdown.

The data once again highlighted notable performance variations across the retail landscape. For instance, although clothing store sales did rise in July, they remain the worst hit sector during the pandemic with volumes over 25% down on February. In contrast, despite falling in July, online retail sales have experienced significant growth over the pandemic, with volumes 50% higher than they were in February.

Overall, the retail sector has bounced back more strongly than economists had expected and July’s figure again topped analysts’ expectations.

However, there remains a great degree of uncertainty surrounding consumers’ continuing willingness and ability to keep spending and some economists feel the recovery could prove temporary.

The latest Distributive Trades Survey published by the Confederation of British Industry (CBI) also struck a note of caution. In total, the monthly retail sales balance fell to -6 in August from July’s 15-month high of +4 suggesting a slight decline in sales compared to levels achieved a year earlier. Furthermore, September’s sales are expected to fall at an even faster rate.

Commenting on the survey, CBI Lead Economist Alpesh Paleja said: “Trading conditions for the retail sector remain tough, even against the backdrop of business slowly returning. Firms will be wary of deteriorating household incomes and the risk of further local lockdowns potentially hitting them in the pocket for a second time.”

The latest public sector finance statistics revealed government debt breached the £2tn mark for the first time amid heavy spending designed to support the economy through the COVID-19 pandemic.

Figures released by ONS show that UK public sector net borrowing (the gap between the country’s overall income and expenditure) totalled £ 26.7bn in July. This was the fourth-highest monthly borrowing figure since records began in 1993, with all three higher figures being recorded over the past three months.

As a result, total debt rose to £2.004tn in July, £227.6bn more than last year’s level. It also meant that, for the first time in nearly 60 years, debt crept just above 100% of the country’s gross domestic product (GDP) or, to put it another way, the debt figure is now greater than the value of everything the UK produces in one year.

The burgeoning debt level largely reflects the vast sums of money the government has spent on emergency support for the pandemic hit economy across a range of measures including the Coronavirus Job Retention Scheme. In addition, the Treasury has also faced a severe reduction in tax revenues due to the economic impact of imposing lockdown.

With interest rates at historically low levels, the government is spending less servicing its debts than had been forecast before the pandemic hit. However, economists have warned the situation will inevitably get worse before it improves, with August set to see another jump in borrowing to fund the final Self-Employment Income Support Scheme payment and the ‘Eat Out to Help Out’ scheme.

Chancellor Rishi Sunak commented: “This crisis has put the public finances under significant strain. Today’s figures are a stark reminder that we must return our public finances to a sustainable footing over time, which will require taking difficult decisions.”